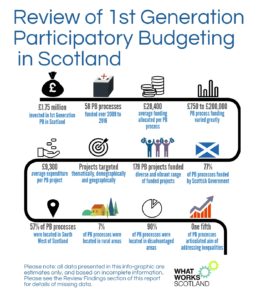 Data about participatory budgeting in Scotland. Click on the image for a larger version

Participatory Budgeting (PB) has the potential to empower and energise communities and to transform and strengthen the relationship between citizens, civil society organisations and all levels of government and public service.

Scotland has recently embarked on its own PB journey, and the profile and spread of PB has markedly accelerated over the past five years; from little more than a handful of known PB processes in 2010, to at least 58 processes having taken place by 2016. Alongside this grassroots growth of PB within Scotland’s communities, there has also been increasing political, legislative and policy support for PB.

This paper presents a review of existing evidence about the PB processes that have taken place in Scotland up until June 2016. The review examines the growth and development of the first generation of PB in Scotland in order to generate insight to support the strategic and operational leadership and delivery of future PB.

Authors: Chris Harkins and Katie Moore from the Glasgow Centre for Population Health, and Oliver Escobar from What Works Scotland