The Report on the Scottish Parliament, published this week by the Commission on Parliamentary Reform, includes ideas for democratic innovation based on research and evidence from What Works Scotland. 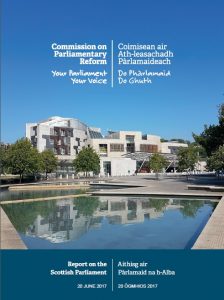 The Report suggests a wide range of reforms to improve the Scottish Parliament’s internal processes and place deliberative quality and public engagement at the heart of the institution.

What Works Scotland co-director Dr Oliver Escobar, Lecturer in Public Policy at the University of Edinburgh, gave evidence to the Commission about new forms of participatory democracy, such as mini-publics.

Ideas about mini-publics are incorporated into the Report in the chapter on Deliberative engagement and democratic innovations, including this recommendation:

“R66: As part of moving towards a more participative approach to scrutiny as envisioned by the CSG, the Committee Engagement Unit should pilot minipublic approaches.”

Recommendation 66, Report on the Scottish Parliament

The Report explains: “…. Mini-publics also provide an opportunity to build capacity in the Parliament by utilising external knowledge and skills. They complement and inform the decision making process but, crucially, do not replace the decision taking responsibility of members. This approach is in keeping with the Parliament’s founding principles. We consider deliberative approaches would be well suited to bill scrutiny or to examining issues where it is important to understand the public’s views on a complex moral or social issue. They could be used as part of an inquiry into an issue where public opinion is divided. The mini public report would demonstrate to the committee what happens when people with different views are invited to deliberate and report their conclusions.”

As well as speaking directly before the Commission, Dr Escobar gave written evidence and also  provided a research briefing, co-authored with Dr  Stephen Elstub from Newcastle University, on Deliberative innovations: Using ‘mini-publics’ to improve participation and deliberation at the Scottish Parliament.

This participation in the Commission process  is part of our range of on-going work focused on participative decision-making, community engagement and governance.